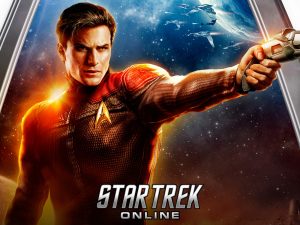 Like most Trek Fans, What attracted me to Star fleet was the idea of being able to do something I have always wanted. The ability to play in the world that I loved so much.  Sadly as much as we would love to have our own majestic star ship, technology hasn’t quite caught with our dreams yet. What it has caught up with though is the ability to capture our drams of pretending we are the commanding officer of intrepid crew of explorers in a computer generated world.  Set thirty years after Nemesis, Star trek online (or STO) is a universe of conflict. The once utopic universe of the television icon of star trek is now in conflict.  Political alliances have fallen and new threats have emerged. Those that were once allies are now enemies and enemies now are allies. As a player you create your own charter who has command thrust upon them. Your mission, to try to bring some balance to this unbalanced universe. Weather as a Star Fleet officer for the Federation or as an Honorable warrior of a mighty Klingon Empire, STO is a game with endless possibilities.

Curremtly several members of the Tiburon crew as well as hundreds of members of Star fleet play STO, if anyone of you also play STO fell free to contact us   to excahnge  player information.