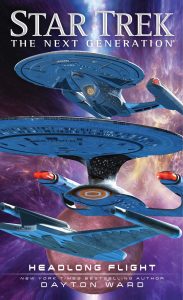 Continuing on a survey mission of uncharted space known as the “Odyssean Pass,” a nebula catches the interest of the crew U.S.S Enterprise E. During their survey of the spatial anomaly, a rogue planet appears inside the nebula where it was not before. Although no life signs are detected on the barren world, a garbled message, warning all to stay away from it is being broadcast. Determined to aid the planet despite the warning, Captain Picard sends Commander Worf and an away team to look into the plight of the planet. Elsewhere, the starship Enterprise D, commanded by Captain Wiliam Riker, is also studding a nebula and detects a rouge planet that seems to randomly appear and disappear.

Are these two planets one and the same? Worf and his away team, after having to make an emergency landing, soon discover the true fate of this mysterious lifeless world, one that has both the planet and its inhabitants locked in to an unending cycle of shifting between different dimensions as a result of glitched experiment.

I loved this book. As an avid reader of the Trek novels, it was nice to have the feeling of what could have been an amazing episode. Author Dayton Ward has once again has shown that as a fan of Star Trek himself, he knows what fans want. I found this novel easy to read as it continuously kept my interest, as well as kept me invested in what was happening, especially to see if my own foreshadowing was correct.