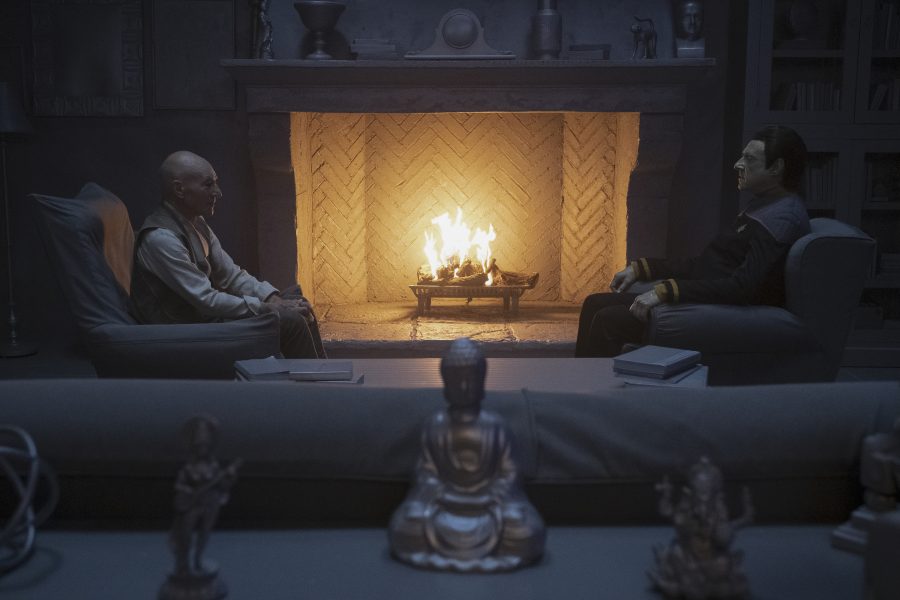 Who are you? It’s such a simple question that seems like it should be paired with a simple answer, but the longer it is pondered, the more complicated it becomes. It would be fairly safe to assume that a person, at least so far as one can self-explain, is some conglomeration of biology, memory, and neurological activity contained within a physical form that carries with it with a linear past of formative experiences. That is a fancy way of saying a person has a body, mind, and past, and if you take any one of those things from them, they cease to be. However, any fan of Star Trek already knows that isn’t necessarily true. Transporters basically destroy a body and reassemble it somewhere else and artificial minds are more than capable of taking on any task a human brain might tackle.

So then, just who is it that steps off the transporter pad? Is it the same person who left the planet, or a whole new one, simply possessing the same memories of the old? They would undoubtedly say that they are, indeed, the same person, but is that subjective assurance to be taken at face value? It is interesting how something so integral to Star Trek and so mundane to the characters who use it could be the cause of so many existential questions. It seems as though Captain Archer had every reason to be wary of the technology.

Being a fictional technology, no one can say for sure just how (or if) a transporter works, but canonically it’s said to convert matter to energy and then reassemble that energy back into its original form in a different location. Avoiding the side issue of how a transporter contains and directs several gigatons of energy peacefully, it is very safe to assume that matter cannot be converted to energy without destroying it. Therefore, the person who appears on the other end of a transporter beam might as well have been formed anew. Even if a transporter can somehow keep track of the quantum state of every subatomic particle, it would be a stretch to say that the atoms themselves survived the process. And yet, it seems that they are, for all intents and purposes, still themselves on the other end. Or so they say. It is really only when something goes wrong that they bother to address any of these questions. 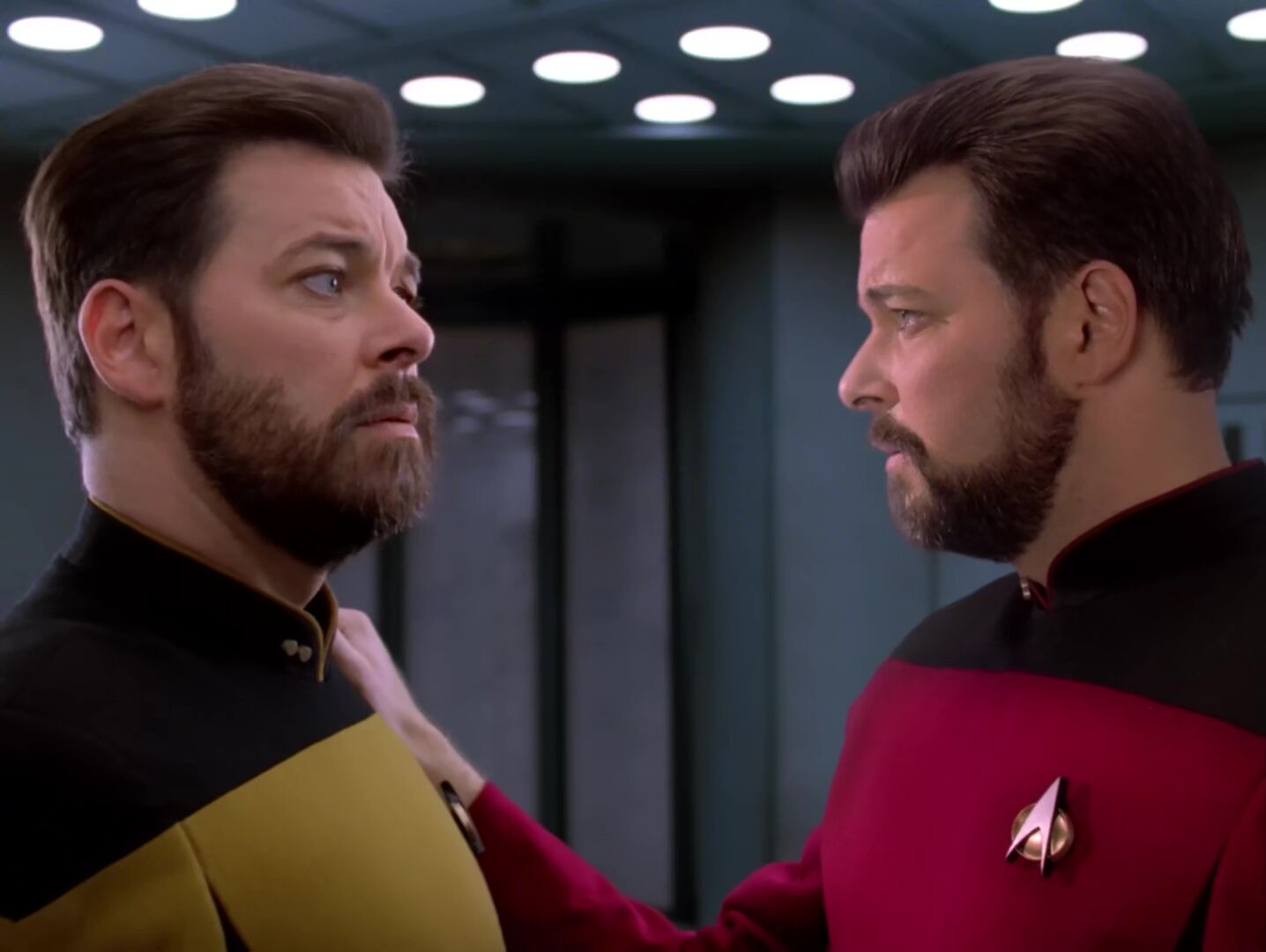 Consider the curious case of William and Thomas Riker. Following a transporter accident on Nervala IV, the singular person who was Will Riker was now two. Conveniently for the plotline of the episode, a significant amount of time has passed and there is no doubt that while they might have the same memories and body, they were no longer the same person. But what if it hadn’t? What if they had both appeared on the transporter pad at the same time? Both would undoubtedly state that they were the real Riker, and beyond that, they’d both be right. Now, skirting the ethical issues of what’s stopping some sort of unscrupulous race from creating an unstoppable army of soldiers stored in a transporter buffer, this incident highlights the importance of a contiguous past to our sense of self. The truth is, there is no objective way to discern which copy is the ‘real’ Riker. What was once one is now two, new and wholly formed beings. So what happened to the person who was Will Riker before the split? Is he dead in such a way as to be mourned, or is there now just twice as much Riker to love? I’m not sure there is an answer to that question.

Concerning the eight years of separation between the two Rikers in the Second Chances episode, it is clear that the time that has passed has changed both of them and shaped them into different people, with unique personalities and lived experiences. Their memories of that time have shaped their brain structure and neural pathways so that they will make different decisions and interpret situations differently. While there is a grey area of nature versus nurture, memory is an integral part of just what makes a person who they are. The exact method for how memory is stored in the human brain is unknown, but the devastating effects of its loss are irrefutable. Be it amnesia or the slow and painful march of degenerative dementia, loss of memory can lead to the loss of a person even with the continuation of their physical form. 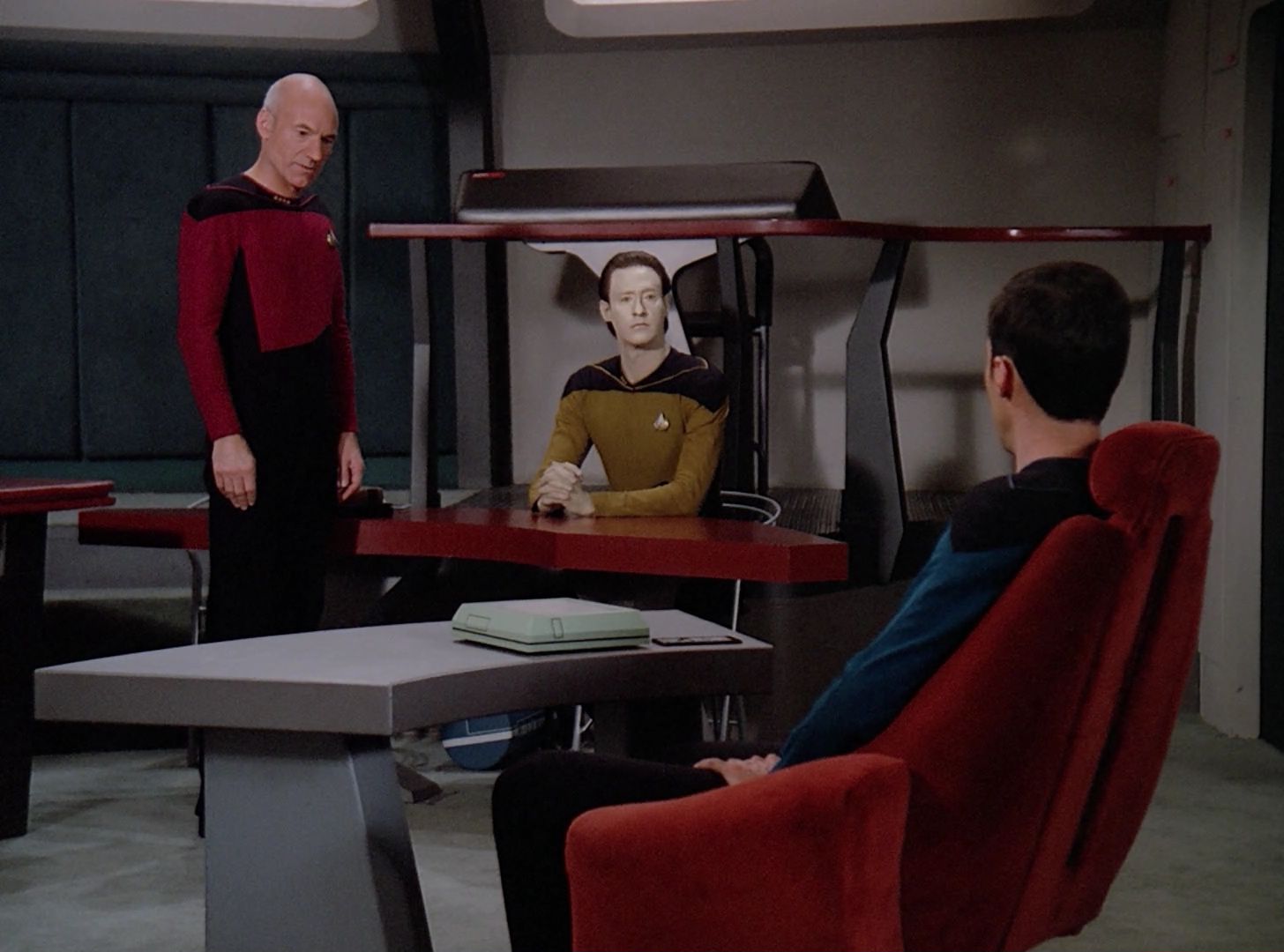 The loss of memory and memory devoid of physical form is the core issue that spurs the events of another iconic Next Generation episode, The Measure of a Man. Maddox wants to place Data’s memories into storage on the computer of Starbase 173 while he examines the machinations of Data’s positronic brain. While the memories would be preserved, there is doubt as to if they would ever be able to be returned to Data’s body, which would effectively end the person who is Data, even if both memories and body are still intact on their own. This highlights the delicate balance of the mind and body interaction, and how the loss of one means the loss of a person, even if some part of them goes on. A mind devoid of a body is just as lost as a mindless body.

Data states that his positronic brain has around eight hundred quadrillion bits of memory, or what amounts to about 8 petabytes of storage. The human brain is small in comparison, holding only about 2.5 petabytes of memory. How large then must the computer core on Starbase 173 be to be able to hold all of Data’s memories without impacting the day-to-day functioning of the station? The answer is clearly that it is very, very large, and even without definitive numbers, it would be capable of storing the entirety of many human minds. Considering that the pattern buffer of a transporter can do much the same thing on a broader spectrum, there is no reason to think that a human consciousness and mind couldn’t be downloaded into an artificial container and preserved long after the loss of the physical body. It could be retrieved later or perhaps conversed with, as well as given form via hologram. Yet, it would be a stretch even in the Star Trek universe to call that collection of data a person, let alone the same person it was before they were downloaded even if they would likely insist otherwise.

So why is that? Why is it that the Rikers are instinctively recognized as two people even though they share the same memory and past, but a mind that has been stripped of its body is no longer seen as a person at all? It seems as though there is some deep instinctual connection to a person being a ‘thing’ in a physical sense. Perhaps it is the eternal nature of digital data that feels wrong. Once they are downloaded, time stops for them until there is some interaction with the outside world. The EMH or Doctor from Voyager struggled with this distinction, and while he was very convincing in asserting his sentience, very few thought of him as a ‘person’ when he was confined to sickbay without the ability to form or possess a permanent body.

The topic of just what can and cannot be considered a person is a central theme to the newest Star Trek franchise, Picard. Dealing extensively with artificial life forms and intelligence, it touches on just about every point possible in this topic. While the overt plot is centered around the right to exist for non-organic life, and the continuation of their existent lives, there is a lot of subtlety beyond that. Perhaps most importantly, it highlights that it is the balance of past, body, and mind that makes a person and not one outweighs the others.

This is seen clearly in the intertwined story of Picard and Data, and the mirrored arch of their lives and deaths. While the memory engram of Data lives on in a virtual world, ageless and without true form, Picard faces his own mortality and the struggle of physical existence. In the end, Data sees that a life without body or end is a life unfulfilled and entreats Picard to let that one final memory fade. At the same time, Picard finds that it is possible to live on in a new body and have a second chance at life.

As touching as both these scenes are though, are either truly an end? Is the end of Data’s memory engram simulation really his death, or did he die when his physical form was destroyed during Nemesis? What about Picard? Is the same mind and memories in a new body the same person, or is he a new person with an old mind? What if the process were repeated? Would the new golem still be Picard? Both stories are deeply tied to sacrifice, and the giving of one life to save another and that pushes the audience to believe that they are the same people they used to be. That they earned their second chances, the chance to say goodbye. They get to live on not just as themselves, but as to fulfill their potential. Data now knows that to be alive means to face death, and Picard can complete his unfinished work.

Thus it seems that any one part of what makes a person can be lost, and then restored without the loss of that person. The important part is that there is some form of continuation from past to future in either physical or mental form and that the person has the chance to keep changing and growing. The only way that they can prove to still be themselves is through their actions and by living up to their own expectations for their lives. In this way, who you are is inextricably linked to what you do and not just what you are. Star Trek has always promoted a core of IDIC or infinite diversity in infinite combinations, and that holds true to one’s self as well. Though key parts may get lost or change, the core of who you are, the part of you that can say “I am me,” lives on.