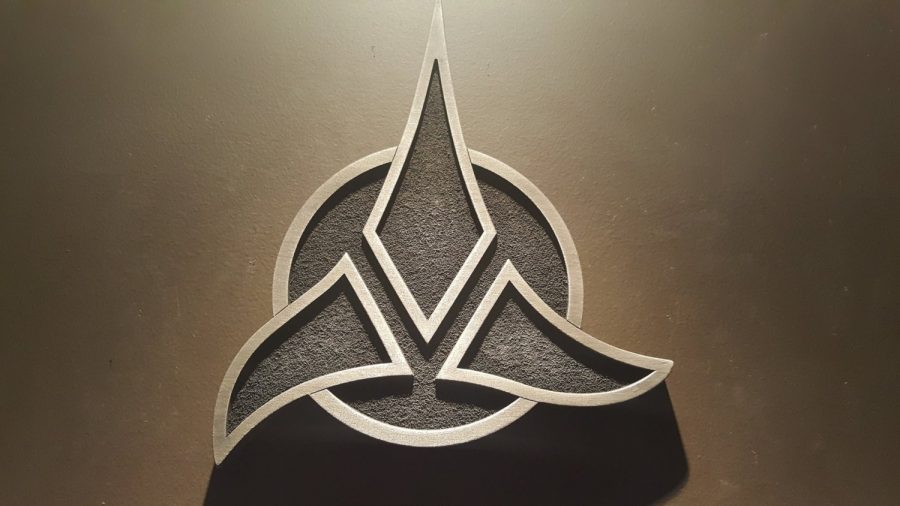 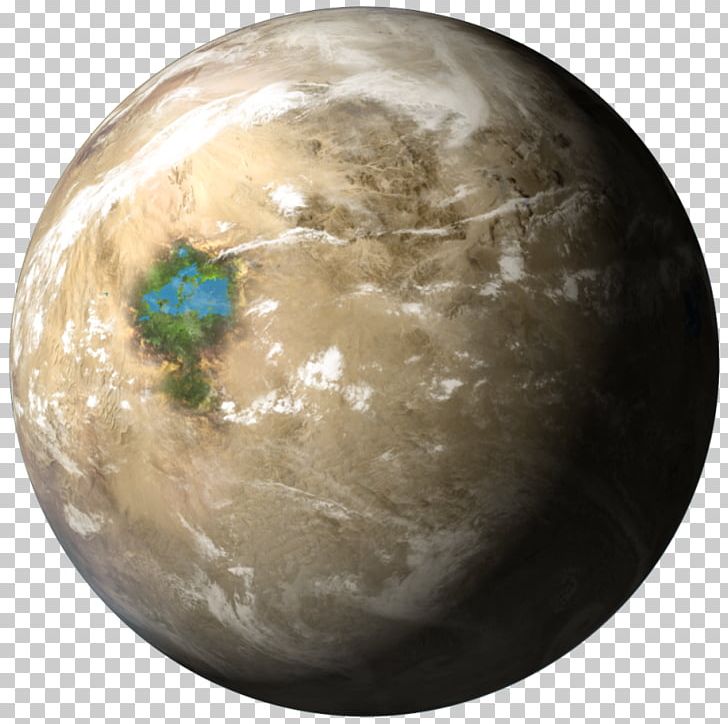 Being exiled, I was assigned to the desert planet of Rawl, to an old and abandoned military base, charged with being the empire’s eyes and ears in case of imminent danger. A fool posting and my burden to bear, seen as the son of a traitor. The entire planet homed no more than half a million people, a mix of species that had settled there. The planet’s only claim to fame was their dilithium refinery, which made the planet worth something. I spent most of my days watching monitors and checking screens for attacks that would never come. It seemed that this would be where I perished from boredom. On my off hours I frequented a small bar, run by an old Caitian, named The Black Hole. It seemed to be rather popular, though poorly named, regularly full of people and loud. I would take my war nog and sit quietly in the corner. This became routine for me until one evening, when I was approached by a hooded figure who placed themselves at my table and placed a bottle of blood wine in front of me.

It had been several years since I had been abandoned here, and long since I tasted such a fine vintage. The larger figure removed his hood to reveal he too was Klingon. His name was K’tal, and he had been born on this forgotten world. A son of none, now alone, he traveled to Rawl searching for a purpose. We shared the bottle of blood wine and spoke of what had brought me there. Up until meeting K’tal I had thought that I had been the only Klingon on the planet, but K’tal had assured me there were more of our kind. For he had journeyed from his home, a small village called Doyerd, to Varen outside the military base to find me. During his travels he had heard the legends of ancient warriors of this world, and that of an old Klingon Cleric of their ways who lived in the region called Urned, three days west of Varen.

K’tal urged me to join him in his quest to meet this Cleric, and I obliged him. We rode the next few days on a strange six-legged animal the locals called striders; the animals were almost 2 meters tall and had long necks, with a strange blunt snout. We had traveled west for almost the full three days, passing what seemed long-forgotten dwellings and unpaved, unkempt roads of a time long forgotten. We kept thinking we were lost in the desert until we found what seemed to be a vineyard; long vines were strung across a long fence surrounding a modest dwelling. As we approached the area, we were greeted by two older Klingon women with large spears. They had asked us to state our business, as they did not take kindly to visitors. We told the old women of K’tal’s quest and that of my exile, and what had led us on the search for a legend that had led us to them. They invited us into their home and introduced themselves as the Cleric MaKaju and her wife MaKari. They had come to Rawl several years before us to retire, as they felt they had done their service to the empire. MaKaju began to tell us the tale of her grandfather, who had come to Rawl in his youth, challenged by his own father to survive the desert as a test of warrior. HgTah, as he had been named, wandered the landscape, lost, for days. Malnourished and dehydrated, HgTah was rescued by an unknown warrior, who had tended to him back to health and took him to his camp to meet his fellow warriors. HgTah had stumbled upon this group calling themselves the K’noton. These warriors had protected the land of Rawl long before our time, being the only protectors the land had. HgTah spent many years learning from the K’noton before returning to his fellow Klingons, sharing his knowledge of their ways with his family. The ladies explained to us that they had once belonged to a noble house but upon retiring, they now live their lives as K’noton. MaKaju and MaKari had been continuing the tradition, caring for the now-forgotten warriors ways to any who inquired and making their own brand of blood wine. After listening to these stories of how a group of warriors had achieved great honor protecting this dust ball of a planet, I had found a renewed sense of direction in my role on Rawl. I conferred with K’tal, and we agreed to unite with MaKaju and MaKari to found the house of the K’noton. The ladies accepted our offer and appointed me as their Line founder and head of the house.

We then left our new purpose to begin to make changes within Varen. K’tal and I departed on our journey back to Varen, only to find as we approached that the dilithium refinery was being 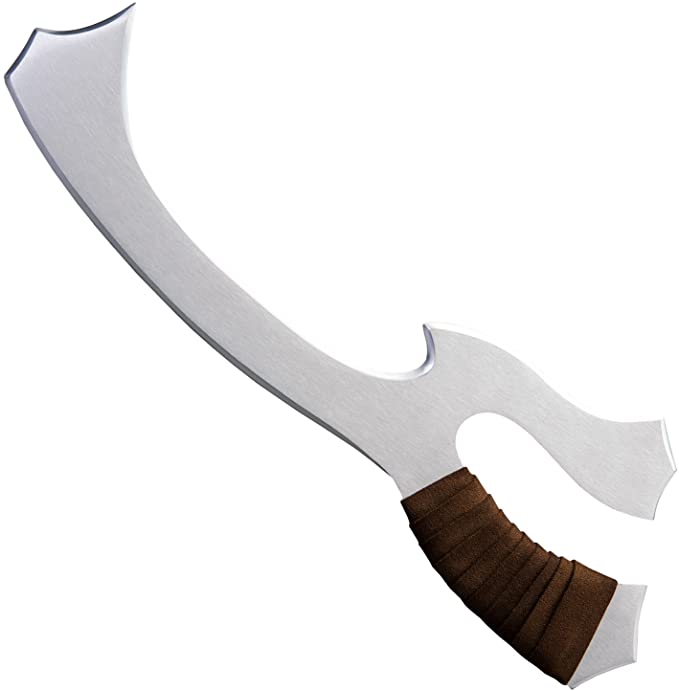 attacked. As Rawl was mostly abandoned by the military, it was subject to attack by raiders. A close nemesis was that of the Exas. Two Exas scout ships had entered Rawl space, landed at the entrance of the refinery, then had fired on the refinery’s small defenses of two small turrets and shot down its fence, causing the explosion we had seen on our return to Varen. K’tal and I rode at the top speed the striders could carry us, stopping right outside the limits of the refinery. The refinery was busy processing night and day, as its workers worked shifts throughout the day and night to produce the refined ore. We approached under the cover of darkness, trying to conceal ourselves. Bodies of the refinery workers lay about the area, in defensive poses after having put up what little fight they could. K’Tal had been given an ax by our newfound housemates, a weapon of our new namesakes, which he brandished, and I had drawn my mek’leth. It had been easy enough to sneak up upon the first two Exas, who stood guard standing outside the refinery’s doors. Silently grabbing one by his neck and choking him into a silent slumber, I drew my mek’leth across his throat, killing him just to make sure he would not be any further trouble. K’tal had grabbed the other guard, spun him around and shoved his axe handle into his gut. As the guard was doubled over, K’tal had chopped off his head. Exas scout ships carried only four beings, which meant with the two guarding the door, there were only six left. K’tal pulled a disruptor and crawled to the landing of a stairwell, scouting ahead, as I took a crouch position listening in to the faint sound of phaser fire and the death gurgles of the refinery workers. An Exas grunt appeared at the top of the staircase, a large tetryon rifle in his arms. As he walked by K’tal fired his disrupter, catching the grunt in the side of the chest. The grunt fell to its side and slumped to the floor of the landing it was on. K’tal ran to the top of the landing. I sprang from my crouch and scaled the stairs to be at K’tal’s side. We both took a moment to scout the situation and location of the remaining forces. We kept silent as we overheard the plans of the Exas. What I had originally thought had been a sabotage attack turned out to be the first part of an occupation mission. The scout ships had come to test Rawl’s defenses, finding the leader of the mission had taken upon himself to

secure the refinery as the first conquest. The Exas commander gave orders to the other grunts to stand watch as he searched for a communications station in order to relay to other ships they had secured the refinery. I drew my disrupter and sprang from our hiding spot, shooting the first grunt in the leg. The grunt responded to my battle cry. He had pulled his tetryon blaster, aiming it at K’tal, when his leg gave out and his shot went wild, shooting his fellow grunt in the head. Their mission leader was all that was left of their scout team. I followed him till he had reached a communications terminal and then charged at him, mek’leth at the ready. He spun a large pike in his hands, swinging it wildly at me. I ducked under his arching swings and drove my mek’leth into his lower abdomen. He staggered at first, then fell to his knees and collapsed. Our foes defeated, I sent a distress signal to any nearby ship asking for aid in case of another attack and to help to make sure the refinery’s core was intact. Four hours passed until a ship descended, responding to our signal. Amongst the crew of the support ship that arrived was a young Klingon engineer assigned to assist us. Her name was Kembre and was my mother’s sister’s daughter, my cousin. Once the reactor was contained correctly, we spoke at length; she informed me of what had happened during my absence. Kathos, although dead, had been found innocent of his crime of mutiny, and Jur’oth had been excommunicated by the High Council, his house abolished. She then extended an offer to take K’tal and myself back to Qo’nos as well as sponsor me within the house she was now a member of, House Vampyr.