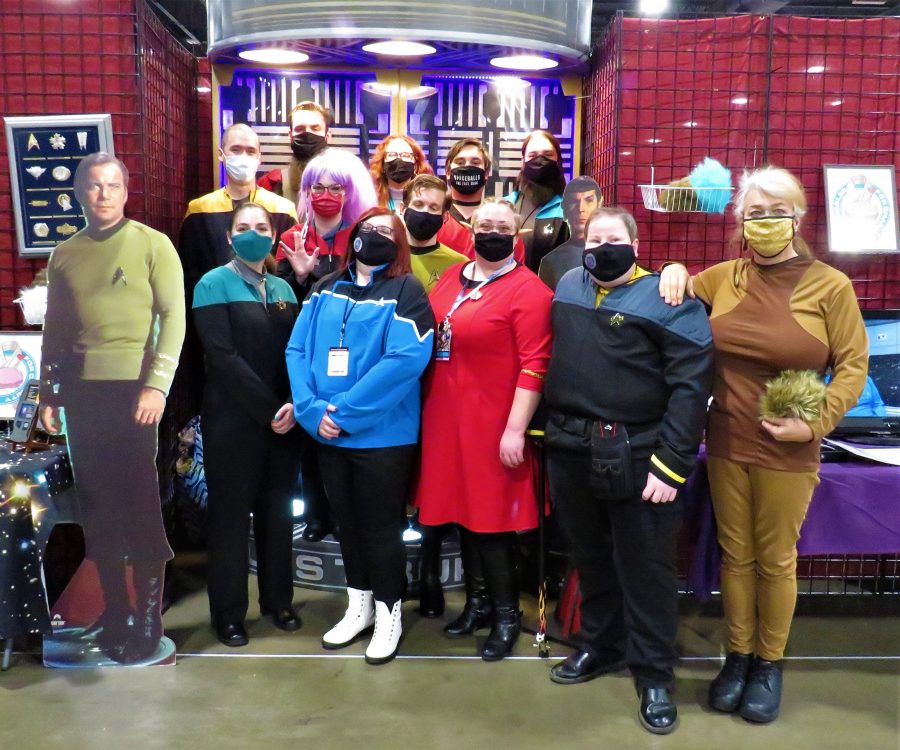 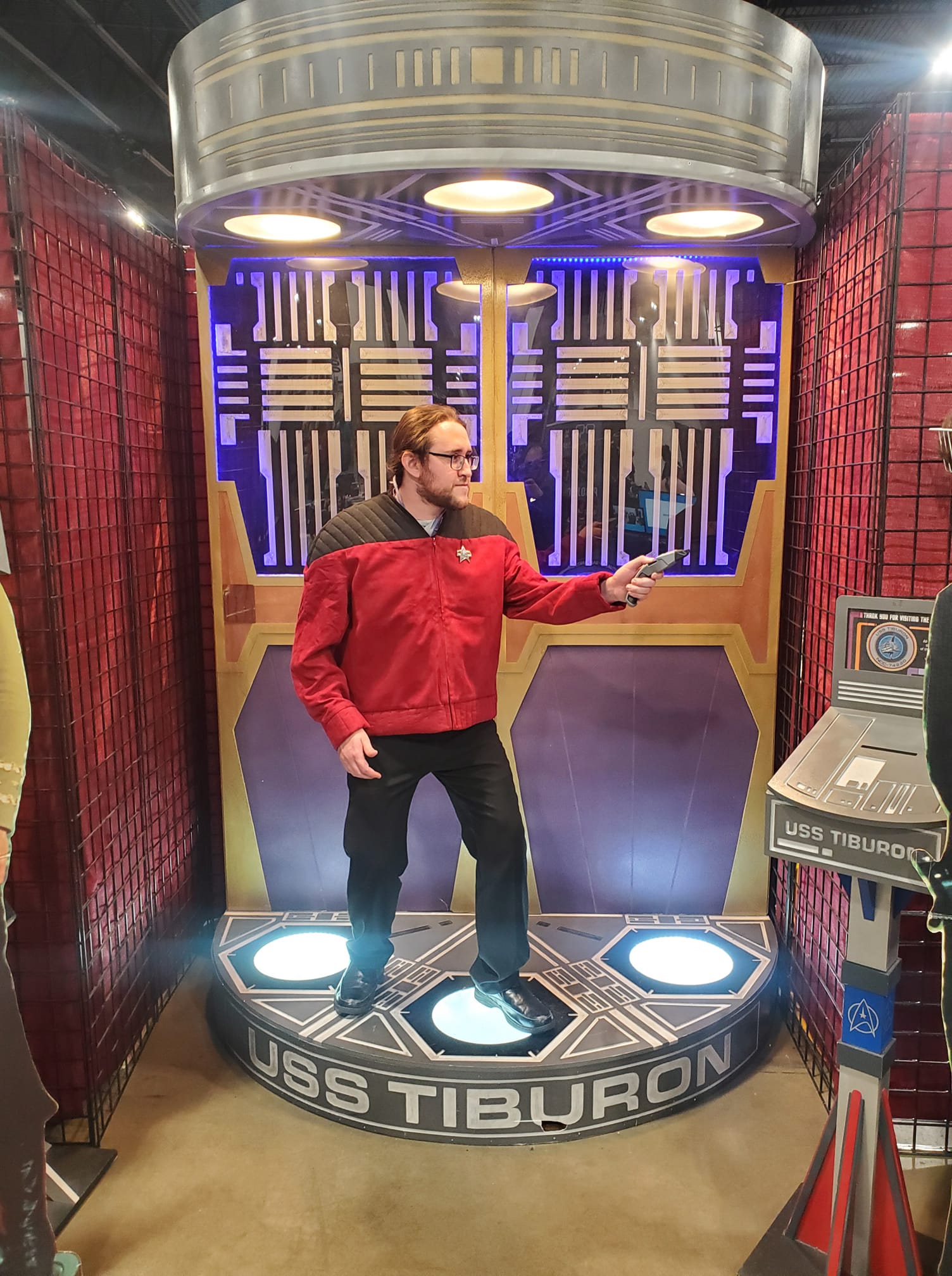 My first Con was a unique and incredible experience. It was very different from most people, as I also worked my first Con with the USS Tiburon. Working with a group of people who had a shared love of Star Trek and getting to nerd out over our shared love was truly special, and I felt like I was really a part of a real starship crew. Getting to talk to people who just wanted to share what made Star Trek special to them and what it meant in their lives felt like a true honor and something I’ve rarely experienced in my life.

Also being in a room full of people who shared a love for comics, Star Trek, anime and everything in between was one of the most welcoming experiences in my life. Getting to help cosplayers take awesome photos in our booth felt so great, and the feeling of nerding out over their cosplays and their literal expression of their love and joy for something was unbelievable.

I hope this is the first of many many Cons I go to with the Tiburon!

A week ago, I’d never heard of the USS Tiburon. By Sunday afternoon, I felt like part of their family. I’m not kidding.

I discovered them on Google when I did a search for “Denver Star Trek fandom,” found out they had a group on Facebook, and was soon chatting with Bran Stimpson, who has been running the Tiburon since it was founded more than 15 years ago. He openly invited me not just to their upcoming meetings, but also offered to let me join them in running their display at FanExpo Denver.

That warm sense of welcome friendship continued when I met other members during the coming days, people who were interesting and fun to talk to, who loved Star Trek enough to spend long, tiring hours building an amazing convention display, and also had fulfilling lives outside of their fandom.

There’s still a lot I don’t know about the USS Tiburon’s group activities, but I’m looking forward to finding out. 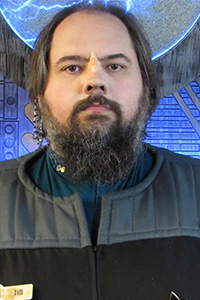 This year the USS Tiburon was invited to be part of the first ever FanExpo in Denver. We have set up our display at Denver Comic Con and Denver Pop Culture Con in the past, but this was the first year FanExpo was running things. We didn’t know what to expect from the largest convention organizer in the states, but I feel they did a great job. FanExpo considered this to be a “small” event; if that is the case, I’m almost afraid to see a “big” event. Compared to past conventions held in Denver, it was lacking in the number and the prevalence of guest stars; however, that didn’t seem to damper the enthusiasm of the attendees or the amount of vendors on the show floor. There were a few names that most people would recognize, but all in all, it did seem to have a lot fewer guests than most past cons. It was still fascinating to know we were just feet away from guests like Zachary Quinto and the legend himself, William Shatner!

For the first time the Tiburon was given the honor of setting up our display on the showroom floor. In the past, we were always given space on the bottom floor in some long hallway somewhere. However, this year we were really in the thick of things, so to speak. We were given a 30 foot by 20 foot area right next to the celebrity photo ops and autographs. This seemed to be a high traffic area, as you would expect. Our display was a 360 degree rectangle of awesomeness on all 4 sides! As I said before, we were right next to the celebrity autograph area and could see Shatner from our booth! This stirred a bit of hope that he would see the Star Trek display and wander over. We even put a 4 foot square of his face on the end facing him, but it was all for naught. However, we still had a wonderful time, and talked to and interacted with many Trek fans, both in uniforms and out. All in all, I have to say this was one of the better conventions I have attended with the Tiburon.

For those of you who do not know, there are a lot of time and effort that go into setting up our amazing and ever-growing display. We usually load a truck, trailer or van the night before we set up; in this case, that was Wednesday night. We then take our display to the convention center the next day for load-in and setup. This can be smooth and uneventful or, like most times, we don’t have enough volunteers and can end up taking a lot longer than it should have, and people can sometimes get hurt because we’re trying to hurry. As I said before, our display is ever-growing, whether it be more gridwall to make it bigger or new display items or even new display cases. We’re constantly changing and rearranging the display, making sure that no two setups are exactly the same. This may seem unimportant, but when we change things around, we get visitors from the past who tell us how different and cool it looks each year. I personally love talking to repeat visitors; sometimes they end up joining our ranks on the second visit.

We have been invited back to next year’s Fan Expo Denver event; it is going to be in July. I personally am looking forward to our next interaction with folks at FanExpo. I hope we have a long and mutually beneficial relationship with Fan Expo for years to come. We were told that our Star Trek display was the best they’ve ever had, and I for one take that as a high compliment. I hope to see many more of our wonderful crew at the next Fan Expo. I know we can always use the help, and trust me, it is always an amazing time and experience. In conclusion, this year’s FanExpo 2021 Special Edition was amazing. For those of you who were unable to attend, you missed out, but hopefully we’ll see you next year. Until then, stay safe, wash your hands, and Live Long and Prosper! 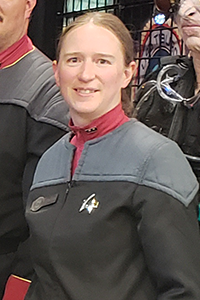 So for those who didn’t know, Fan Expo Denver is the new Denver Pop Culture Con, aka Denver Comic Con. This Halloween event was a special edition, and luckily this will not be the standard date for future events. Those will be held more on the time of the former Comic Con, and the next one will be held over the 4th of July weekend in 2022! So we have that to look forward to in the near future.

Unlike our previous excursions, the Tiburon Experience was up on the showroom floor with the vendors, and let me tell you, it was a very different experience. Despite having a few miscommunications with the move-in procedure, we wound up being in a great location and were able to pull the van right up to our space and get things moving. This is only the second time we’ve done a ‘display in the round,’ so to speak, and I think it turned out great. We had all manner of Trekkie goodness on all sides, and thanks to some last minute donations of display cases from Dan “RightTime” Z., we were finally able to display the Bat’leth and other prop weaponry that we have not been able to share in the past.

Everyone who showed up to work did a fantastic job, especially our newest member Eris, who really took charge and helped us immensely and on top of that took a ton of pictures, which we’re always lacking. Sam was a huge help as well and did a great job selling Tribbles and taking in memberships, and I thank you both so much for everything you did. That thanks is extended to the rest of the crew as well, and while I was running around doing all sorts of things and didn’t have as much time to work as I would have liked, it was great knowing that the booth was in good hands with both experienced members and new recruits alike.

Now it is time to rest and recover and do repairs so we can do it all over again in July. So let’s get at it, Tiburon!