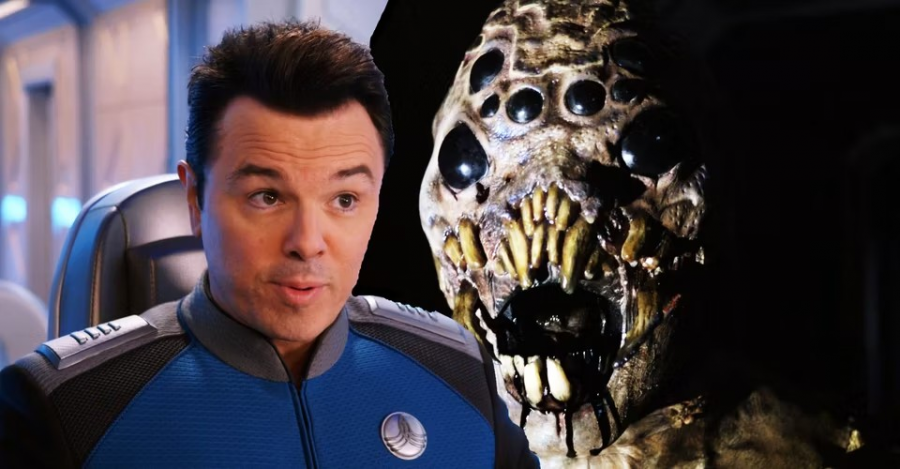 The premiere episode of The Orville: New Horizons truly showed why the popularity is so high for this show, especially amongst Star Trek fans. It was poignant and character-driven, but not without the trademark Seth MacFarlane humor and sense of adventure. While “Shadow Realms” has its share of darkness, it is a slow character burn for the entirety of the first act. The crew are rendezvousing with Admiral Paul Christie, who is to serve as chief negotiator with the ‘frenemy’ alien species the Krill. The Union wants to use a path of Krill space on a regular basis, but the crew of the Orville are most excited that this means it will open vast light years of unexplored space.

We quickly discover that the Admiral and Doctor Finn have a past together. In fact, we eventually find out they were married way back when. During the diplomatic reception with Krill delegate, the Orville command crew and Admiral Christie, the Admiral looks directly at Finn and makes a toast to “a better future.” This in turn makes Doctor Finn feel uncomfortable and also feel that Christie has crossed the line. As the meeting starts to wind down, Finn asks Commander Grayson to come to her quarters to help her finish off a bottle of wine Finn took from the reception. As Claire and Grayson share the bottle, Claire shares an idiom with Kelly about memory being either “a prison or a gallows.” It is a great moment between Finn and Grayson, as the two women begin to bond over their past mistakes in love. The pair rarely get a chance to interact, so it was refreshing to see the friendship develop a little. Eventually, Claire reveals to Kelly that she was once married, and sure enough, it was to Paul.

Christie, Mercer and Grayson meet with the Krill one last time, where the Union is granted permission to cross into Krill space, but there are several conditions. Two of the stricter provisions are that they are equipped with a tracking device so the Krill can monitor their movements, and that they adhere to a very specific path. The Admiral agrees to almost anything but tells them they wanted to explore a region called the Kilar Expanse. The Krill shows more fear than ever before on the show, saying that is basically forbidden space. The Expanse is a place of pure evil, inhabited by demons, and even the most righteous are possessed by this evil and commit heinous acts. The three Union officers take it in stride and weigh their options before making the decision to venture on. Before the Krill leave the ship, they offer a prayer to “those who are about to die,” and ominously inform Mercer and his people that they won’t stop the Orville from heading into the Expanse but they also will not come to their rescue, should the Orville need it.

At this juncture, there’s more backstory built by Christie as he seeks out Isaac to talk to him about Doctor Finn, trying to find out what Finn is like now and what she holds dear. Basically, the Admiral is trying to find a way to get back into Finn’s life.  Once again, we find ourselves following the story of a character who has not earned it. It was a nice moment for Isaac, but the show dwelt far too long on Christie and his hangup on Claire. This is where the episode finally takes off, as the Orville enters the Expanse. The Expanse is complete darkness. There are no stars, no suns, and the only light comes from The Orville, much like the season 7, episode 14 “The Void” of Star Trek Voyager. Commander Keyali Grayson informs Mercer she’s detected a distress call, and so they venture deeper into the Expanse. As they trek further and further, they come across an ominous, organic-looking monolith, which they deduce is some sort of space station. Mercer, Grayson, Keyali, Finn, LaMarr (Chief Engineer), and Admiral Christie all take a shuttle to board the station and get to the bottom of the mystery.

As they begin to explore the space station, Mercer does something that any seasoned D&D player knows to never do… he split the party. As the party splits off to explore more of the space station, Admiral Christie ends up on Doctor Finn’s party, to no one’s surprise. As Christie is the main character for this week, he touches something he’s not supposed to, but all seems well at first. They parties reconverge and head back to the Orville, whereupon the Admiral immediately collapses and begins to mutate. Dr. Finn, after examining the Admiral, informs the captain that something is rewriting Christie’s DNA. Not only is he a guest star character this week, he also becomes the monster of the week as well. 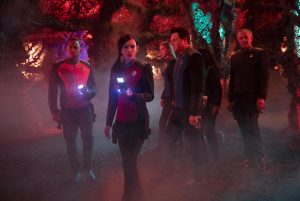 The rest of the episode becomes the “monster of the week” story that all Star Trek fans tend to enjoy, giving us the TNG nostalgia we all love. Christie mutates into an arachnid-looking and aggressive creature, and he somehow manages to cripple The Orville and shut down the power. This leads to characters venturing off on their own, children being left in scary hallways, things that go ‘bump in the night,’ and inevitable jump scares when an unnamed crew member suddenly realizes something is behind them. All these moments create tons of atmosphere and give the episode a very horror-like twist. The Christie alien can also mutate others by excreting a green sputum in the face of its victim; although we never really get a count of how many of the crew were changed, I’m going to say it’s somewhere around the 10 to 15 number. 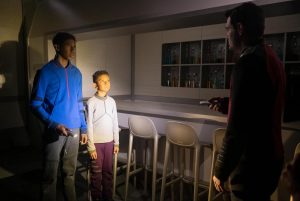 The crew eventually get the turned crew members to leave the Orville, only after discovering there’s no way to save them or turn them back. Doctor Finn appeals to what’s left of Admiral Christie’s humanity, and he in turn leaves with the crew members he turned. However, he did more or less make a threat that they would be back and “It’s not over” before they left. Well, I for one hope to see this new species in the future of the Orville and hope we get to see the development of their backstory as well.

Summing up the first two episodes of season 3 of The Orville can be said with a simple phrase, at least by me: “This is going to be one heck of a ride.” I loved the opened episodes of The Orville: New Horizon, which so far is living up to its title. We have definitely seen some new horizons with the crew, new and old, of the Orville, and I can’t wait to see where their Quantum Drive will take us next.