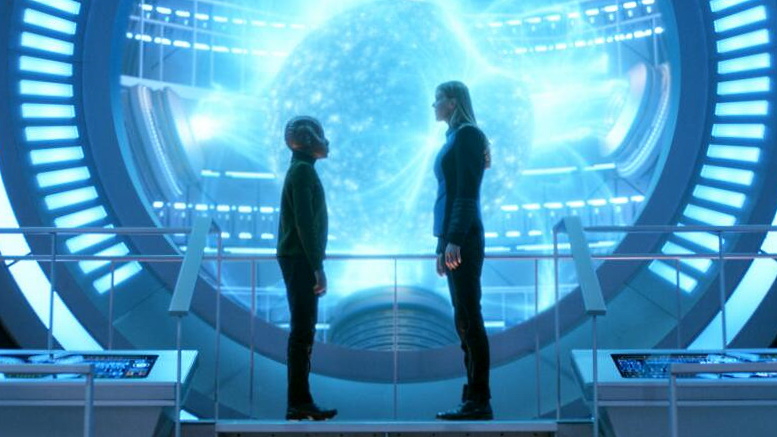 The Orville third season is really starting to dig deep when it comes to controversial topics we see in the media on a daily basis. If you look back to season one of the Orville, we find that Bortus and Klyden have a child. The Moklin race are all males and reproduce by laying eggs and then having to gestate them for 29 days. When the egg hatched and Topa was born, she was a female, which is very rare on Moclan and considered a birth defect. Because this is considered a defect, the Moclan race performs surgery to convert any females that are born to males. Now there is a whole can of worms we can open about doing that type of surgery on a baby, and the Orville did a good job of opening the can back in season one. However, I’m here to talk about the newest dilemma regarding Topa in season 3, episode 5. 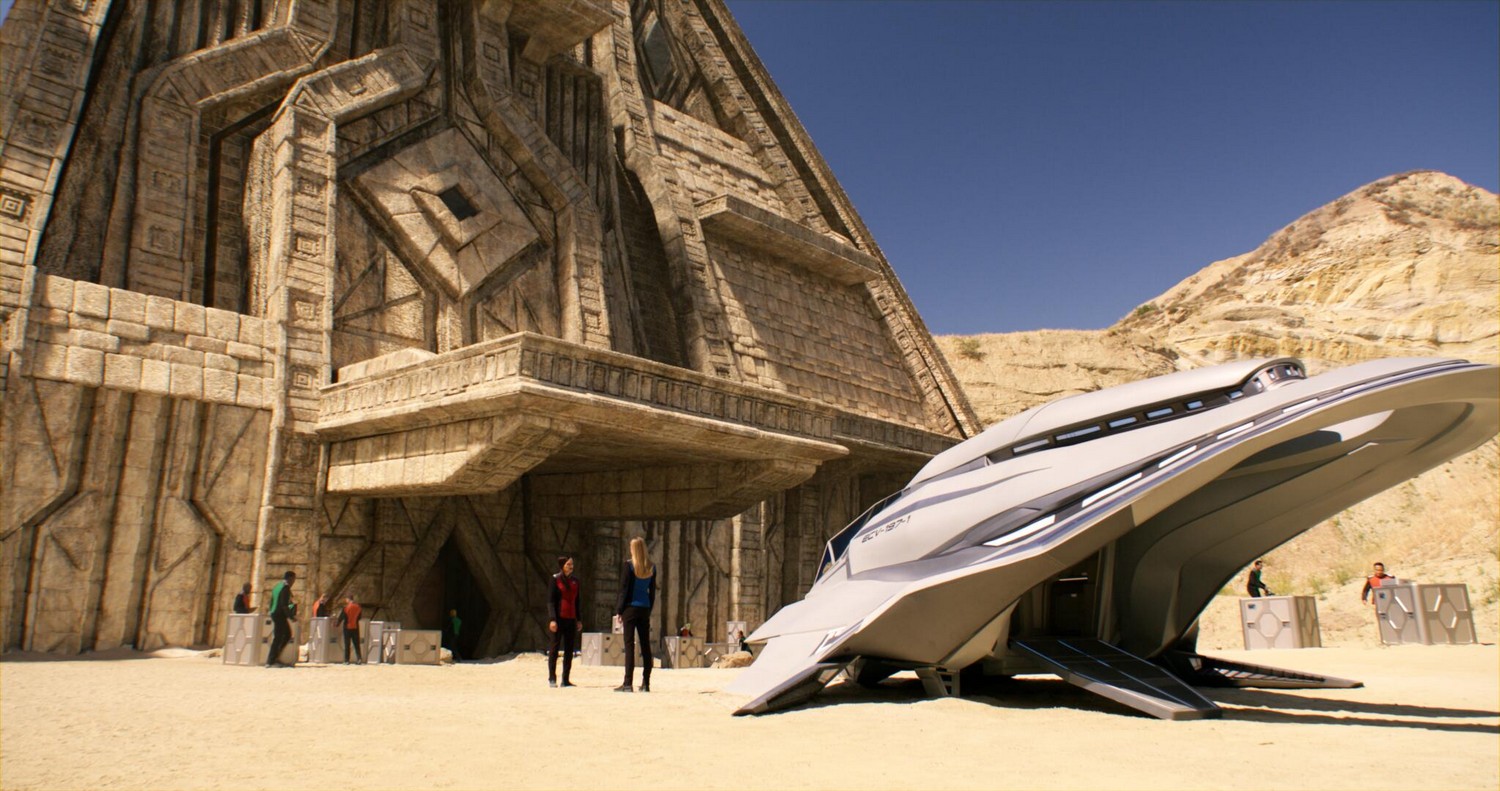 A Tale of Two Topas opens on a desert alien planet, as it and other Sci-Fi shows, including Star Trek, so often do. We see a large temple and what looks to be an archaeological dig being performed. This looks to be an amazing episode of the crew being thrown into a series of trials and tribulations, with Indiana Jonesesque traps, that would pay homage to the adventure movies of old. But sadly no, this subplot has little to no importance to the actual plot, other than maybe a metaphor for the overall plot. Now we’re back on the ship and Topa is on the bridge of a Moclan battle cruiser, commanding a crew in the midst of a large space battle with the Kaylon. Ultimately, we find this is a simulation and Topa is studying to take the entrance exam to the Union Academy to be a Union Officer. This whole scene brings Wesley Crusher to mind when he was studying for his Academy exam as well. 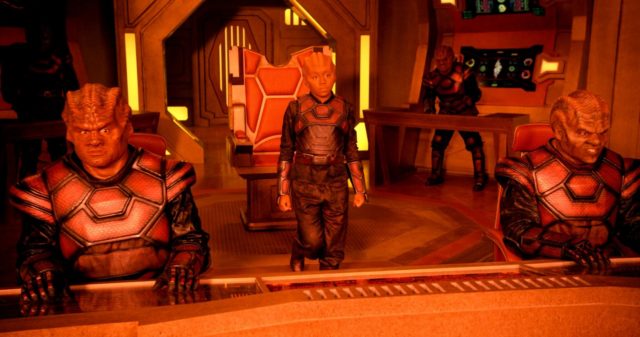 Topa ultimately fails the simulation but goes to Commander Grayson and asks to shadow her to learn what it is to be a Union Officer. During this process is when we learn Topa isn’t comfortable in her male body and ultimately learns she was born female. Now there is a lot that happens for her to find out, but this is a brief overview, and I don’t want to go into too much detail. However, I will tell you that Bortus is ultimately the one that helps Topa learn of her birth origins. Of course, Klyden is against this whole endeavor of Topa learning of her true nature, although we already know he was born a female too; we learned that back in season one when Topa was born. Klyden feels that it would do no good and bring Topa shame and ridicule if she were to learn of her true nature.

Now this is where the temple metaphor comes into play. The most impressive element in the narrative is how the search for the temple’s burial chamber is a metaphor for Topa’s need to know the truth about herself. The team senses something hidden in the temple, just as Topa senses there’s something more to her identity. She even tells Grayson, “Ever since I was a young child, I have always felt incomplete. As if the person I am today is a bookmark — a placeholder — until I discover who I am.” This leads Grayson to talk to Bortus and Klyden about Topa, which in turn starts a fight between the two of them and ultimately leads to Klyden leaving The Orville. When the crew find the door to the treasure chamber, it’s booby-trapped, just as revealing the truth to Topa has knock-on effects on her family and, on the grander scale, the Union, and the safety of the biological universe. 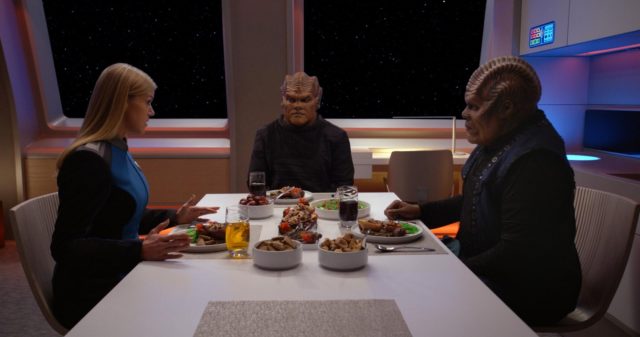 You see, Topa ultimately wants to have surgery to be reverted to her female body, but this is highly illegal on Moclan, and since Moclan is a part of the Union, Doctor Finn is ordered not to perform the surgery in the fear that Moclan would use it as an excuse to leave the Union. Topa is devastated that she won’t have the surgery, but wait, here is Isaac to the rescue, both for Topa and the burial chamber in the temple. The treasure of the burial chamber isn’t riches of any monetary worth but knowledge of the lost culture and its people. Topa hesitates before her procedure because she has no idea who she will be on the other side. To top it all off, in both cases, Isaac proves to be the key to opening the literal and proverbial door. As Isaac can’t be hurt by some old booby traps, he is able to safely open the temple door and help the Orville crew begin to explore what this lost culture was all about.

Isaac not being an official member of the Union, he is ultimately able to perform the surgery for Topa and help her start exploring who she really is. Bortus holds a ship-wide concert in the shuttle bay, to keep everyone busy while the procedure is performed by Isaac. Klyden finds out what is happening and tries to stop it but Isaac is able to subdue him, and Klyden ultimately just leaves. Later, the Union Admirals contact Mercer and Grayson to reprimand them for their participation in this endeavor. However, ultimately they just get a slap on the wrist and also find out that Moclan has decided to stay in the Union, mostly because the Kaylon are still a huge threat to the galaxy. 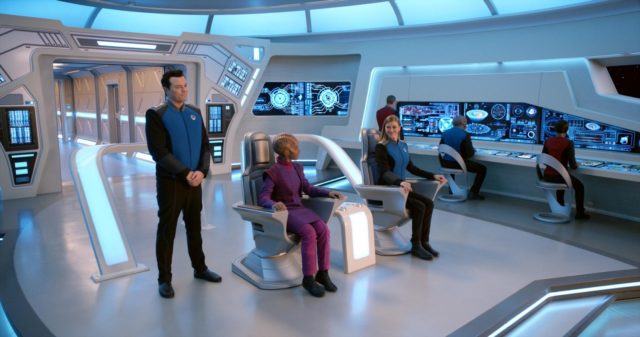 I for one hope to see more of Topa’s growth in the future. I am very curious to see how she develops and if she can be the catalyst to the Moclan ultimately changing their view towards women.

The new direction of New Horizons has certainly given fans some very heavy subjects at times already, but it is most certainly working for the show overall. If MacFarlane and the creative team can better remember the keys to their early success perhaps a little more often, then episodes like this can both educate and entertain. For now, “A Tale of Two Topas,” and episodes like it, may simply have to be satisfied that “educate” can be powerful on its own, and be content with broaching an important real-life issue.