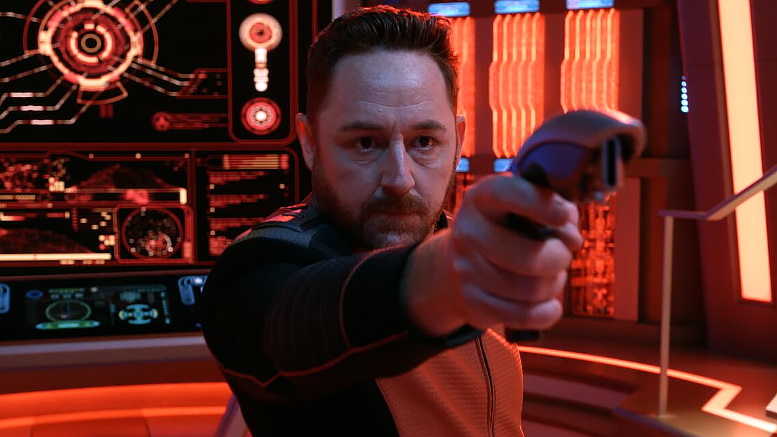 While it’s a coincidence that the season finale of Star Trek: Strange New Worlds and The Orville: New Horizons’ sixth episode of season three in “Twice in a Lifetime” deal with time travel, there’s surprisingly no overlap between the two. In other news, Scott Grimes shows once again that he’s so much more than a funny face as Malloy revisits his The Orville Season 2 Episode 11 love by basically living out his own Star Trek: The Next Generation Season 5 Episode 25, “Inner Light,” plotline. The episode’s premise is that the Orville has an experimental time travel device that naturally becomes potentially dangerous. In a bit of foreshadowing, Gordon voluntarily surrenders his synthesized egg salad sandwich for the device before the ship goes to a rendezvous point to hand over the device to a more secure Union facility. 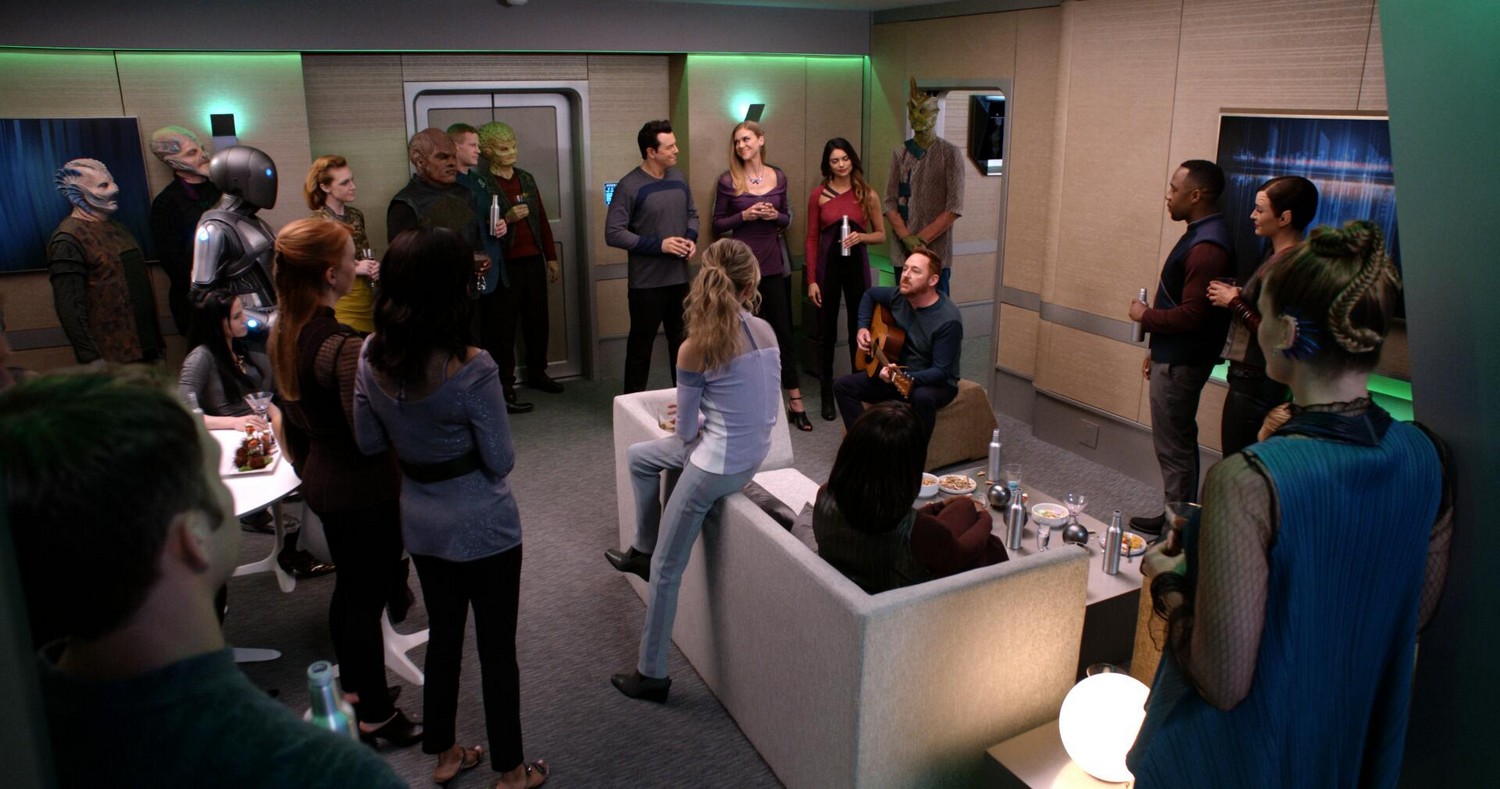 Setting aside the fact that the quantum accelerator (time travel device) is called the Aronov Device when that was what it was called in the alternate timeline, not the prime timeline where Dr. Janice Lee invented it, how bored is LaMarr that he’s messing with time travel? He doesn’t seem as excited as one would think if you just discovered a way to actually time travel. But maybe he realizes what he may have done to the universe and is fighting an inward battle between a giddy school boy and a responsible Union officer. After arriving at the secured facility and finding it destroyed, they’re ambushed by the Kaylon, who’ve taken an interest in the time travel device, naturally. However, it’s never really shown how the Kaylon knew of the device in the first place, or knew where it was heading. All one can assume at this point is that Kaylon can monitor secured Union transmissions. As things appear initially hopeless, during the battle Gordon volunteers to try to destroy the device but ends up transported back in time to 2015 due to a power surge. The only way that the Orville knows of his whereabouts is through the cryptic message he sends from subspace that is calculated to reach the Orville only moments after they discover Gordon is no longer on the ship. Thanks to the efforts of LaMarr, they’re able to travel back in time, but as per the narrative of something experimental, they traveled to 2025, which means Gordon has been on old Earth now for 10 years. Ed goes with Kelly to track down Gordon. 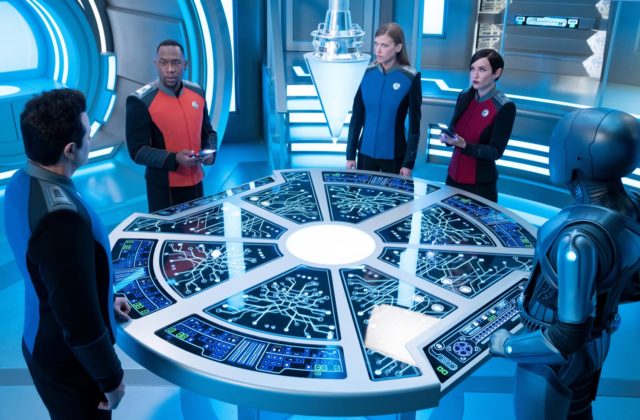 In the meantime, we find out the mineral (Dysonium) that is used to power the Orville, and in part the Aronov device, has been depleted and they need to find more. Luckily the Dysonium will be discovered on Earth at some point in the future, so they can get some more now. However, it’s going to take both Isaac and Charlie working together, once again, to extract the Dysonium from the Earth’s mantle without causing irreparable damage to the tectonic plates, which could have severe consequences in the future. Isaac, using a portable holoemitter to disguise himself, and Charlie set out to find the best location with a significant amount of Dysonium to extract. As a subplot, it’s not bad; they go on a funny, almost buddy cop style adventure to find the Dysonium. They swindle a couple of bikers out of their motorcycles when they realize the most significant amount of Dysonium is over 26 kilometers away. They back and forth like they normally do, Isaac trying to make small talk and get on Charlie’s good side, and she having none of it. They eventually find the source, pretend to be a couple to look at a house that is for sale to get into the basement, and use their machine to extract the Dysonium. Charlie finally lets Isaac have the full brunt of her feelings towards the Kaylon, and Isaac is still, well, just Isaac. 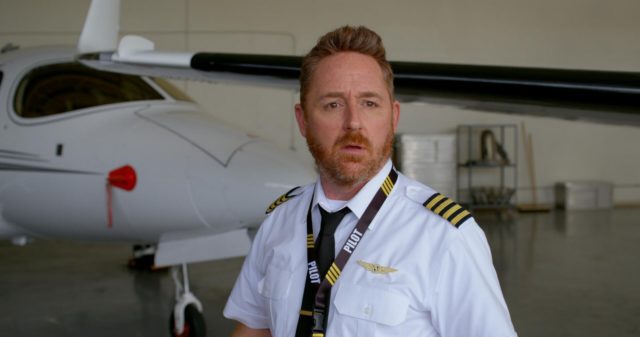 Here, jump back to the main plot line, and that’s Gordon not following the Union time laws. These laws, in short, say if you find yourself stuck in the past, you are to lay low, hide from society and live your life away from people, and try not to mess up the timeline. You know, I’m not sure from where, but that sounds kinda familiar to me. We come to find out what Gordon’s been doing for the past 10 years, and it involves Leighton Meester’s Laura Higgins, whose smartphone Gordon had discovered in a time capsule from a previous episode. Aside from the temporal stalker narrative, MacFarlane found a pretty novel way to deal with the time travel narrative by asking, “What if the subject in question established himself a new long life?” The Butterfly Effect in time and space scratches the surface when it comes to the ripple effects a person can have on the past that affect the immediate future. Yes, previous franchises, including Star Trek, have dealt with time travel on several occasions, including the TNG film First Contact where the Enterprise-E has to deal with the nefarious actions of the Borg already altering the past to affect Star Trek’s future. Arguably The Original Series episode “The City on the Edge of Forever” famously asked, “What would you do for love even if it costs you the future?” as the series saw fit to kill Joan Collins’ Edith Keeler to keep her isolationist ways away from the Nazis coming to power. 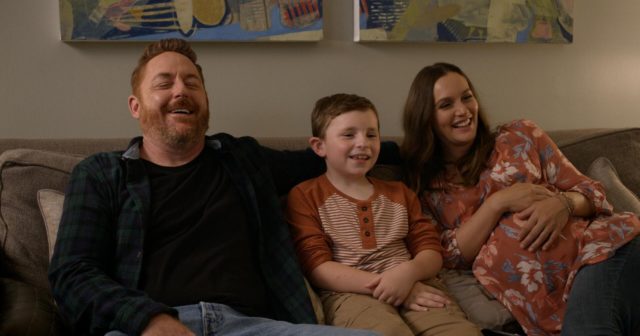 This is a hard question, as we find that Gordon and Laura have fallen in love and built a life together and even have a son and a child on the way. Here’s where things get a little dramatic, and Grimes shows his range in acting. After Mercer and Grayson find out about Gordon’s family, they have only one choice, and that is to force Gordon to return to the future and face the consequences of his actions in breaking the laws of time travel. We find out that Gordon did follow procedure at first, and hid out in the woods for 3 years before coming to the conclusion no one was coming for him. We get to the point where Gordon makes Mercer and Grayson leave, but they come back later with Talla (the Orville muscle) to try to make Gordon leave. He then pulls his phaser and threatens his former best friend and crewmates. This is where the question, “What would you do for love?” comes into play. Obviously Gordon is not going back of his own free will, unless his family comes with him, which Mercer knows he cannot allow either. So they leave. Mercer stops and tells Gordon that they’ll just go back the 10 years and get him then, and they do just that.

In the process of going back another 10 years to get Gordon before he leaves the woods and starts his family, they end up destroying the Aronov device and seem to be stuck in the past. Not to worry; Lamar realizes that the quantum drive is in fact a time travel device in its own right. Like with warp drive, quantum drive uses a bubble to surround the ship when going faster than the speed of light. This is done so that time moves at the same speed in the ship as the rest of the galaxy. However, if you eliminate the bubble, then the ship and everyone and everything on it will be moving faster than the rest of the universe. LaMarr does some nifty calculation and makes two quick quantum jumps without the quantum bubble and bam, they’re back in their own time, right next to Earth. 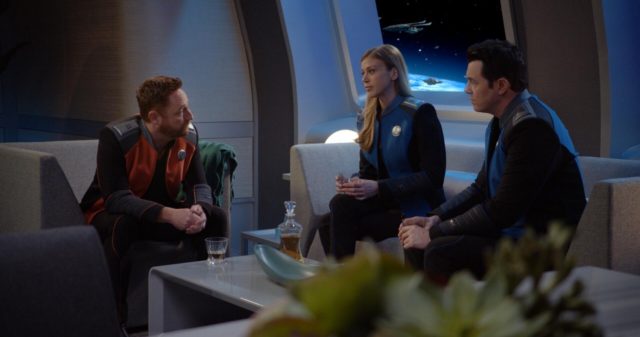 All in all, it was a great episode. It was fun, dramatic, and even had some decent science mumbo jumbo. However, I’m still missing the signature MacFarlane humor that The Orville was first known for. Don’t get me wrong, The Orville: New Horizons Season 3 has been great so far, but it’s been great Star Trek but not really what The Orville was in the first 2 seasons. I’m not saying this is a bad thing, just that I miss the MacFarlane humor.