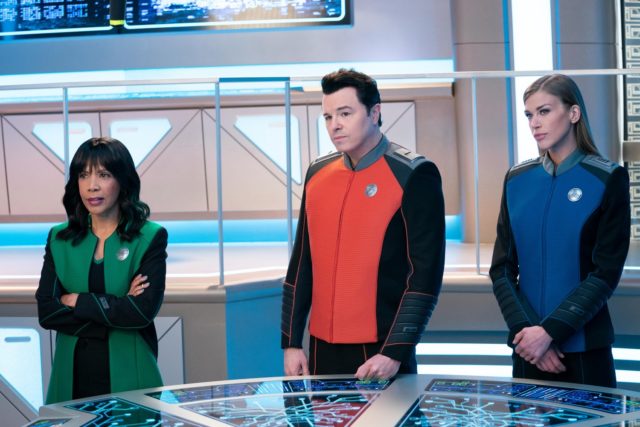 With “Star Trek: Strange New Worlds” wrapping up, “The Orville” is the best new live-action sci-fi currently on TV — and even this season of “The Orville” has only three more episodes left. For the second episode in a row, The Orville: New Horizons prioritizes substance over spectacle in a touching and intimate episode about love, acceptance, and forgiveness. One needs to look no further than the title of this episode to see one of its central messages. “From Unknown Graves” is a line from “The Witnesses,” a poem written in the 19th century (1841) by Henry Wadworth Longfellow which outlines the crimes committed in America against slaves. We also get our first look at the “builders” who originally constructed the Kaylon artificial lifeforms and how they treated the Kaylons that ultimately led them to turn against their makers. 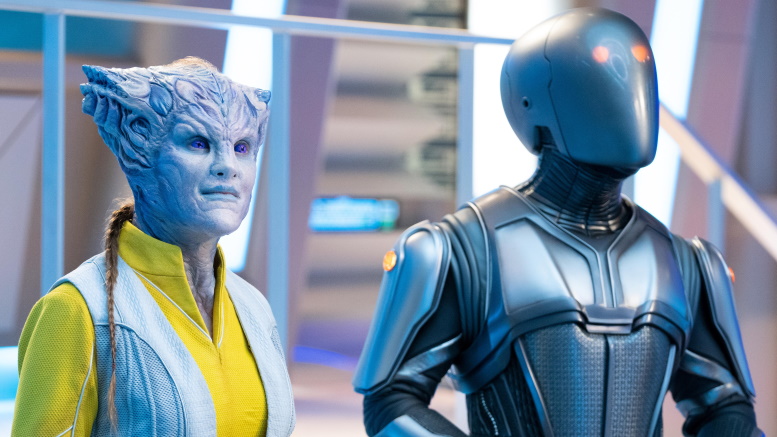 So, from the very outset, our imagination is aglow with whirling, transient nodes of thought careening through a cosmic vapor of invention. Are we in the present day? We must be. This is an unknown alien race, and somehow they’ve managed to get a Kaylon. Is this a relic left over from the Battle of Earth? Do they know how dangerous it could be? A thousand different outcomes are possible… and maintaining the mostly very high standard of writing this season, what actually transpires is nothing we might have considered, at least not yet.

Throughout the episode, writer David A. Goodman unveils a series of these vignettes where the family and the Kaylon, referred to as K1, interact. Each interlude we see the family become more and more horrible to the (then) peaceful Kaylon, at first simply being rude to the indentured, laboring artificial intelligence, and eventually abusing him. These specific anecdotes paint a more complete picture of the history of the Kaylon and the “Builders,” the biological species that created the Kaylon, who fans of The Orville know will eventually be wiped out by their creation. The flashbacks add context to the discovery of a peaceful and fully emotional Kaylon named Timmis.

Now we switch to The Orville as it’s heading to neutral space, in orbit above the planet Situla IV to negotiate an introduction with the Janisi; not full Union membership, but with the Kaylon threat and the collapse of the Krill treaty, any and all allies are essential. In terms of technological development, the Janisi are on about equal terms as Earth. However, the biggest distinction is their attitude towards males. They’re a staunchly matriarchal culture, which means any and all males who appear to be dominant are not to be trusted, and males on their home world are relegated to second-class status. Again, another form of slavery, which is this episode’s underlying issue. I feel like I’m watching the old Saturday morning cartoons, with the writers trying to teach me something about being a better person. 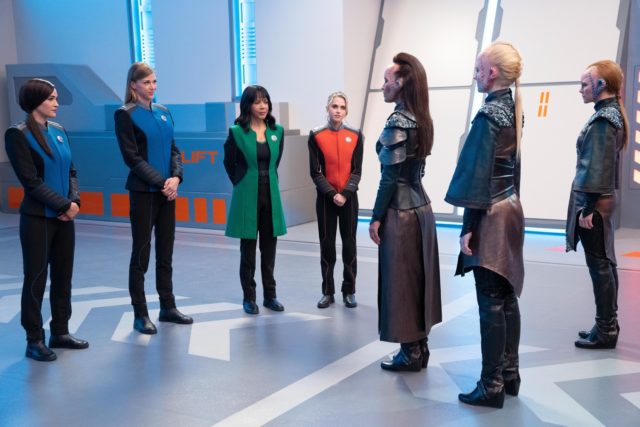 So as not to offend the visiting dignitaries, Cmdr. Kelly Grayson and Captain Ed Mercer have swapped roles and even uniforms. This of course is too good an opportunity to pass up for a spot of comedy, and MacFarlane indulges us with some thoroughly amusing trademark set pieces. At the same time, an energy surge is detected on the planet below, despite the fact that it’s meant to be uninhabited. Ionic discharges in the atmosphere of Situla IV make a full scan difficult, but the surge does not appear to be of natural origin. Since Mercer, Lt. Gordon Malloy and Lt. Cmdr. Bortus have very little to do except hide from the Janisi, they decide to take a shuttle down and investigate.

Throughout the first two acts of this episode, we cut back periodically to the mysterious upper-middle class alien family and their new assistant that they have unimaginatively named K-1. It seems they don’t have much respect for this sentient servant and certainly don’t appreciate it when K-1 attempts to inquire about simple customs and rituals. It’s not even regarded as a second-class citizen, and it becomes increasingly likely that something bad is going to befall this philistine family.

Cutting back to the away mission to track down the source of the unexplained energy emission, Mercer, Malloy and Bortus discover something we had not expected: another Kaylon. They discover Timmis, and immediately raise their weapons. But they’re greeted by a friendly and more human-sounding artificial being, with not a touch of hostility. It seems the daughter of an apparently well-known scientist, Dr. Uhabbus of the Pagosan Ministry of Cybernetics, and her father were in this region of space testing a new iso-neural interface for long-range scanners, when they picked up a faint power signature on the surface of this planet. They discovered a crashed Kaylon ship, badly damaged and in retreat after the Battle of Earth. The other two Kaylon were destroyed, but they found this one was barely functional and as such, no threat to anyone. So they removed his cranial weapons and repaired him. But there’s more. They found a dormant electrochemical pathway in the sensory receptors of his brain. Expanding it, they built an integration nexus in his cognitive network, and now it can experience the full spectrum of biological emotions. Yes, indeed, it’s the emotion chip story, or alternatively, the Tin Man gets his heart story.

The episode’s script is arguably one of the most dense stories in the show’s 33 episodes so far. There is a lot going on, including the crew’s ruse to make the matriarchal Cissians believe the Union also treats males like second-class citizens, a subplot that points back to the incompatible sex life and relationship troubles of Lamaar and Keyali, and Burke’s continued mistrust of the Kaylon. Meanwhile, the central plot about the history of the Kaylon and Timmis’ evolution culminates with Isaac having to make a life-altering decision with regard to whether or not he will have the procedure that will give him that same full spectrum of emotions, and what it may mean to Doctor Finn. 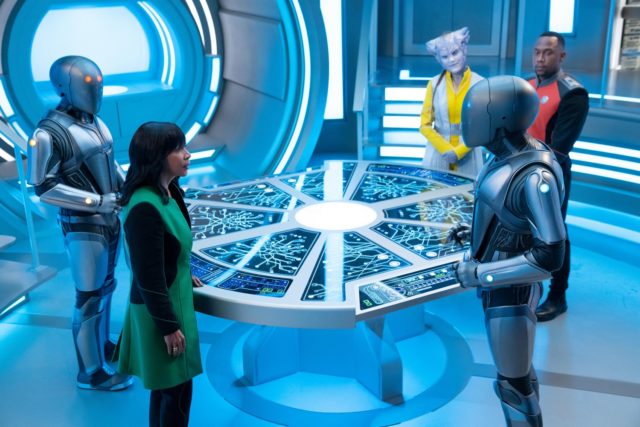 While hesitant at first, Isaac does in fact go through with the procedure, which leads to one of the sweetest moments in the show. Mark Jackson does not receive enough praise for his performance as Isaac. Having to portray a character devoid of emotion while still making him relatable is quite a feat. Granted, it is a Star Trek staple of sorts, as most iterations of that franchise have included a Spock or a Data-like-character within the crew to explore the intricacies of human behavior, and Isaac is clearly inspired by those classic characters. But Jackson has also had to convey this affability while completely faceless. The costume for Isaac only gives the actor the ability to convey subtlety through his voice (which often doesn’t modulate) or his body language, and still, the friendly Kaylon is a fan-favorite. As the emotional levee breaks, Jackson gives a tremendous performance. The outbreak of real emotion begins with just a subtle smile from Jackson, which pulls viewers in, and as more emotions come flooding out, it all seems completely believable in terms of what Isaac could have had bottled up inside of him all along. The relationship between Isaac and Claire has been building for two seasons now, and audiences finally get to see both of them happy and confess their love for each other.

Ultimately, this episode touches on several emotions while watching. We see how the Kaylon were treated by their creators, which is not unlike how humans have treated each other throughout our bloody history. We meet a new race that treats their men as second class people, which we have been doing to our women for most of our existence as well. If you have ever experienced any of this personally, it can be a hard episode to watch. However, it is also a learning experience for the rest of those watching. If we can all learn something from this season of The Orville, it should be that people need to stop being so self-centered and start treating those around them as they want to be treated.