Last week I talked about how The Orville season 3 has been an emotional roller coaster; well, this week really took you to the top of that roller coaster and dropped you fast and hard. It begins with the fallout of the events of Midnight Blue that see the Moclans trying to forge a new alliance, with the Krill, after they were expelled from the Planetary Union for their part in a conspiracy that violated the organization’s laws. We also find the Union coming to the defense of one of their members, Xelaya, with their secret weapon to stave off a fleet of Kaylon ships.

It’s safe to naturally assume that Moclus would try to get back at the Union rather than be completely alone against the Kaylon, so they look to the Krill. Ironically, the patriarchal Moclans forge an agreement with the Krill leader, Teleya, the female Supreme Chancellor, who agrees to the pact but does not take any misogynistic crap from her new “allies.” Meanwhile, the Union secret weapon, which is a literal “Deus ex Machina” as far as the plot goes, is an instrument of genocide to the Kaylon that gives Ed pause, since it can very well be abused on a grand scale.

Given the elements at play and the new alliance forged, it becomes pretty clear that wheels are in motion and that there might not be any turning back. Teleya is coming away as the series’ best villain, with nary a whim, charm, or threat that can chip away at her steely resolve. Her core, unlike a number of other female antagonists we’ve seen in the past in other shows, isn’t born of some injustice but rather the principles of the culture she embraced. She is devoted in her belief that their god, Avis (not the car rental people), has declared that the Krill are the chosen ones of the universe and therefore are entitled to everything in said universe. She is doing everything in her power to make that a reality. You can see in the way she deals with the Moclans that she is disgusted to have to do so. However, and this comes just by reading something that’s not there, the look in Teleya’s eyes says “This is only temporary, and your race will kneel to me as soon as I see fit.” Again, that could be me projecting, but the look she gives the Moclan delegation says it all. 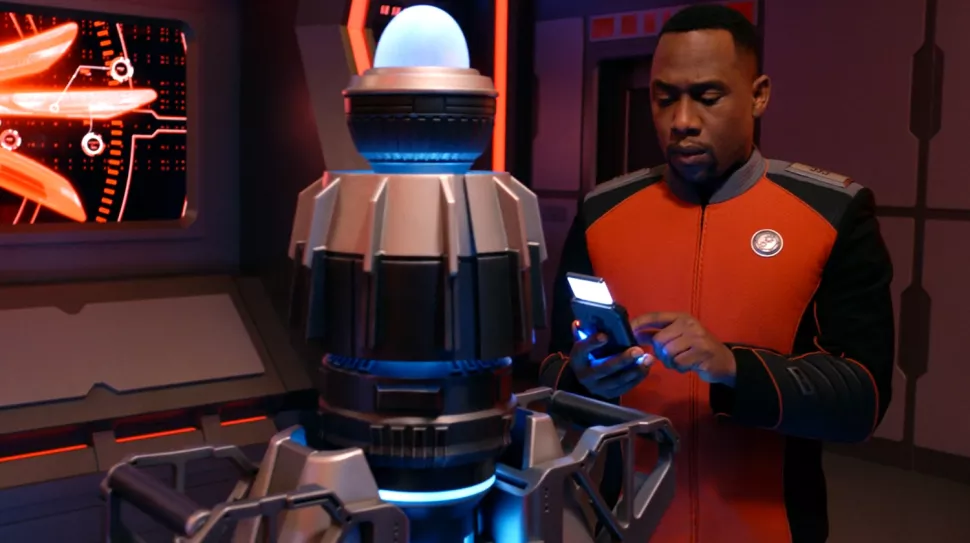 Let’s talk about the Union’s new weapon against the Kaylon. Enter Charly and Isaac, an unlikely duo that seems to have forged a type of friendship, despite the fact Charly still hates the Kaylon race for the war they started, and the death of millions of people across the galaxy. Isaac, with his superior intellect, as he likes to remind everyone all the time, and Charly, with her ability to see the universe in 4 dimensions, are able to work out a weakness in the Kaylon. Much like the Borg of Star Trek, the Kaylon are interlinked almost like a hive mind, but more so that they communicate continuously with each other. This network is the weakness the Dynamic Duo exploits. Now don’t ask me how it works, but somehow they create a machine that sends out a pulse, almost like an EMP, that causes the Kaylon and their ships to pretty much self-destruct.

Now let’s look at the implications for a minute. The Union just created a weapon that could, given enough power from a big enough quantum core, send out a signal to the entire galaxy that could destroy every last Kaylon, resulting in the genocide of an entire species. You would think that kind of power would scare people, and it does a few, like Mercer and some of the Orville crew, but there are some that think they should pump as much power in the weapon as possible and destroy all the Kaylon. This includes Admiral Perry, who, after the council decides to offer the Kaylon a chance for peace after seeing the destructive power of the weapon, sets a plan in motion to steal the weapon and hand it over to the Moclan and Krill alliance. This ultimately results in his death, as Teleya doesn’t want the Union to know of their newly formed alliance. However, the Krill and Moclan are also in the mindset that the weapon should be used to wipe out the Kaylon in one fell swoop. They take the weapon to a secret base, to the Moclan’s most prominent scientist, so he can reverse engineer the weapon and figure out how it works. 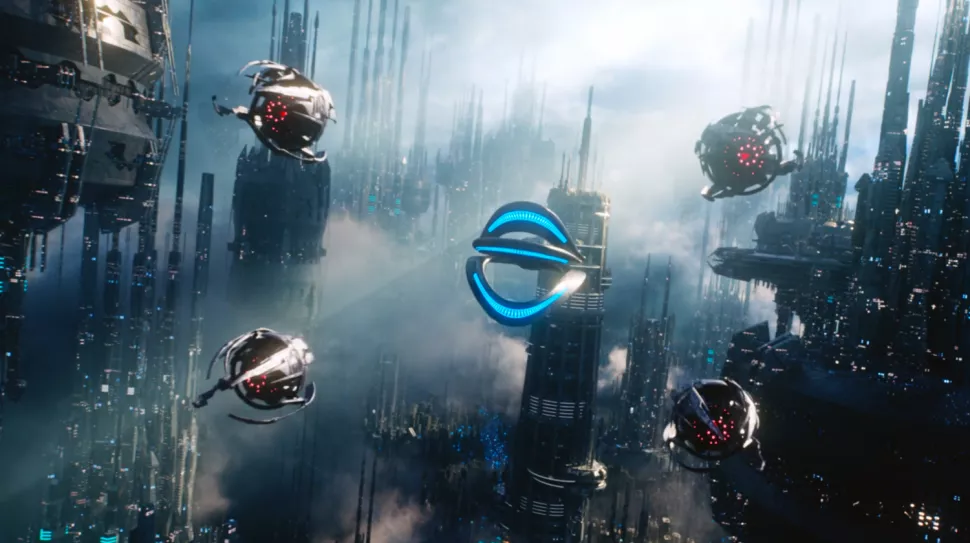 Once the Union learns of the weapon being stolen and figures out where it was taken and also finds out about the Krill-Moclan alliance, they call the Kaylon. The Kaylon had at this point agreed to a ceasefire and started talking about peace. With this new development, the Kaylon are understandably upset but ultimately agree to join forces with the Union to retrieve the weapon or destroy it if they cannot get it back. The Union and Kaylon form a battle plan to hold off the enemies’ two fleets and give a shuttle with a combat team a chance to land on the planet and infiltrate the facility to locate the weapon. This combat team consists of two Kaylon, Isaac and Kaylon Primary, the leader of the Kaylon, and three women, Grayson, Keyali and Charly. In my humble opinion, this is a big poke in the eye at the Moclan’s misogynistic ways.

Over the next 20 minutes or so of the episode, we have fantastic space battles and dog fights with smaller fighter type vessels in the planet’s atmosphere. We see the infiltration team get into the facility and work their way to the weapon location. This is where the emotions start to run high. The team finds the weapon and realizes, after a great attempt by Charly and Isaac, the weapon cannot be turned off and will need to be destroyed. The Moclan soldiers and scientists that are present decided to make a run for it, but Kaylon Primary has other plans and shoots them all in the back as they flee. Charly and Isaac realize that the only way to destroy the weapon is to cause an overload. The only problem with this plan is that it has to be done manually, meaning someone has to stay behind. In this case, Charly is the one who has decided to make the ultimate sacrifice, much to the dismay of the rest of the party, except for Kaylon Primary. However, you can tell he is very confused as to why she would give her life to save his people. 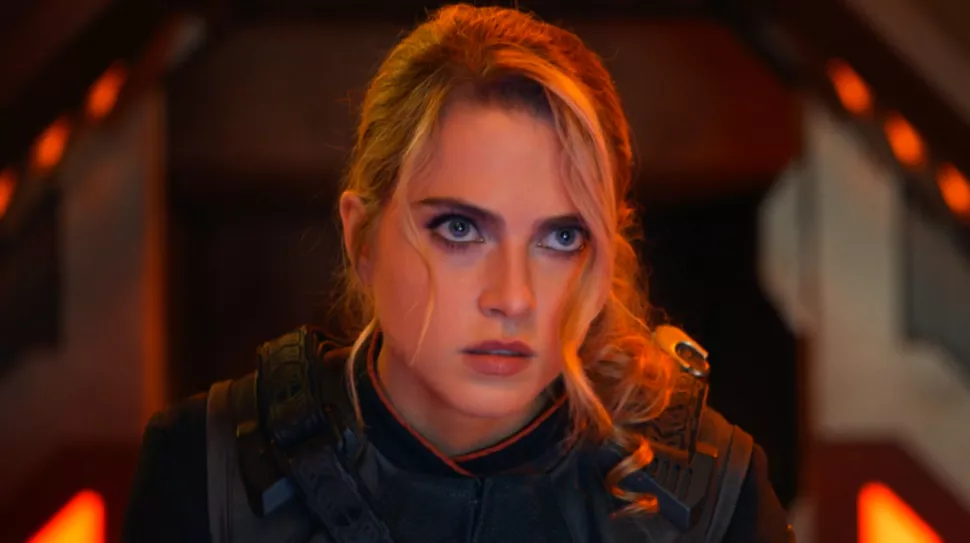 This is where the apt name of the episode, Domino, really takes hold. By giving her life to save the Kaylon, Charly creates a logical feedback loop for Kaylon Primary, similar to how the weapon creates a mechanical one in the Kaylon matrix, that causes him to stop and re-evaluate what his race has done to and their belief of all biologicals across the galaxy. Her sacrifice is the first domino in a line that ultimately leads to peace between the Kaylon and the Union. For the Union to land in an alliance with the Kaylon in light of the new Krill-Moclan threat required a dramatic and meaningful reversal of perspective for the Kaylon, a species not known for their flexible thinking. Now that the idea that not all biological beings are like the Builders has been accepted as verified data, it looks like the Kaylon are fully on Team Planetary Union. Although not without first making very Kaylon observations about the state of biological governance, but that’s to be expected, they are Kaylon after all.

Most of this episode channels its “inner Star Wars” a bit as it deals with layered battles from outside the planet, planet-side with smaller vessels, and the infiltration to a military facility. A well-paced, powerful chapter offered everyone their time to shine as we steamrolled our way to the shocking and fulfilling ending. And then there is that gut-churning realization that we have only one more episode to go. It seems repetitive to say again, but the VFX on this show are, as always, a helluva ride. Not only do we get multiple space fleet battles and that MASSIVE explosion from the quantum core, but how much fun does free-jumping out of a shuttle in egress suits look? LaMarr leading Malloy and the Pterodon squadron to take down the transmitter array looked just like Beggar’s Canyon back home. Too bad they couldn’t find that thermal exhaust port, eh? But all joking aside, it’s been a sci-fi delight to watch this season unfurl such gorgeous VFX work. I can’t wait for this season’s final episode, and I’m hoping against hope that it’s not the final Orville episode ever.