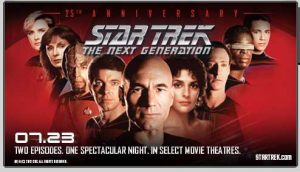 NCM Fathom and CBS TV are coming together to present a special one night event to celebrate the 25th Anniversary of Star Trek: The Next Generation.

This special event will include exclusive looks at the massive restoration of season one, never-before-seen interviews with the original cast members and behind-the-scenes looks at the artists who created the original FX elements and photography during the making of the show. Audiences will also be privy to an unseen sneak-peak of “Measure of a Man.”